As a digital marketer I often spend my day wondering how I can improve my website to make it the best experience for my users. I’m still a junior and have encountered a hard learning curve when it comes to converting my leads into sales.

At times it can feel frustrating that so much effort is put into optimising my site for search engines, only to find that my customers aren’t using my site in a way that I would like. The new reality is that putting effort into search-engine-optimisation, social media and pay-per-click advertising are only some of the first steps to converting customer interest.

As the primary source for my traffic, Google is essential to my businesses well-being. With more and more regular updates from Google, the Hummingbird algorithm and the rolling out of Rankbrain, we can see the increasing importance of user experience design. Consistent specialist insight from the likes of Rand Fishkin at Moz, make it clear that there is continued focus, from search engines, on user experience through optimised user interfaces. And thus, everyday user experience is becoming increasingly prevalent in my work as a digital marketer.

I grew up playing video games from an early age and as such I have been exposed to digital user interfaces all my life. Some of the best and most refined user interfaces are from the makers of video games. With an increased complexity in video game manufacture, the menus that we use to navigate such programs require significant planning and thoroughly considered design. Intelligent design and the ease of use for customers can often make or break a video game. Confusing menus are to be avoided at all costs.

There is increasing evidence out there that suggests digital interfacing can benefit from a technique coined as gamification. Gamification in UX is nothing new and you don’t have to be making a video game to make use of it’s techniques.

I recently finished reading a great article by UX Planet that outlines how user engagement can benefit from gamification. But, what is gamification? According to the article, gamification can be roughly defined as, “the technique of exerting game mechanics into the non-game environment”. This can cover anything from fancy graphical integrations to animation reward based interactions. Web-designers and user interface designers make use of the techniques of gamification to make their application more fun to use. Simply put; their efforts are to make the user experience more enjoyable for a customer by enticing them with game-like mechanics.

The article goes on to explain which techniques of gamification can be exploited to better a user experience for customers. It used to be that designers would refine their designs through simplification. This technique still rings true in many cases but is often outweighed by adding techniques from the game world. Whilst making an application or website more simple to use, designers in addition, challenge their customers and attempt to retain their usage via reward based interactions.

The primary goal here, in my opinion, is to focus on user retention. If a customer enjoys using a service or interface then they are much more likely to return and consequently make a purchase. Jeffrey Humble defines user retention as “the activity that a selling organization undertakes to reduce customer defections”. According to Dynaware only 16% of users will return to an app that has crashed twice. With 25% of the world’s economy being attributed to digital business (Source: Accenture, Technology vision), the innovation required for a better user experience is reinforced and can’t be ignored.

If you are a digital marketer you will be used to being pushed around by search engines and forced to alter the way you present your business online, for both the customer and the engine. I want to talk about the best techniques being applied by companies that are ahead of the curve when it comes to user experience. Some of which, make use of gamification.

Although gamification and VR technologies may be the latest additions to user experience. It’s some of the most successful internet companies today that had to pioneer their own techniques to best their competition.

As part of my learning, I have been paying considerable attention to some of the most successful consumer sites on the internet. No other site on the internet is as critically acclaimed as Amazon when it comes to being on top of the e-commerce game. When designing a user interface it’s important not to overwhelm your customer with endless features. Amazon are champions of customer experience. They make use of countless techniques, many of which I will have overlooked and/or will fail to understand. However, I wanted to focus on one feature that I, and many others, think make Amazon the superstar service it is today.

It concerns Amazon’s use of ratings. They first introduced their product review system in 1995 and it wasn’t very popular among experts. However, the so called experts were soon proved wrong. In actuality, the introduction of a ratings system proved to be a success. By the turn of the millennium the internet was quickly becoming one of the most used and trusted sources for product research by consumers. Amazon recognised this early on. By 2008 up to 70% of Americans said that they consulted product reviews and consumer ratings before making a purchase (Source: Penn, Schoen & Berland Associates). It’s this fundamental statistic that had drawn our attention towards customer views in the world of web-retail.

As far as online auctions go, Ebay is one the best. It’s right there as one of the most popular millionaire making sites on the internet. Ebay was launched in 1995 by Pierre Omidyar. Originally the site was set up as Auction Web, only a small part of a larger personal site. It had been set up to sell Pez dispensers and additional kinds of collectables. In 2002, Ebay became the market leader in electronic commerce. Ebay, like Amazon, defined their profit margins by taking a fee from transactions, rather than stocking or selling the products themselves. 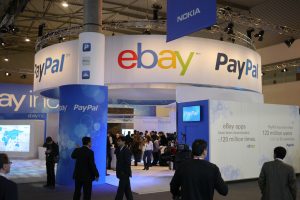 Ebay relies on a number of core features. Feedback, a section on the site allowing customers and clients to give feedback to one another and to give feedback on the products that are being sold and bought. The feedback system is centred around a star rating, again much like Amazon.

Part of Ebay’s initial success depended on having a great payment system that would make their business of profiting from transactions, far easier to implement and manage by both their clients and themselves . PayPal also offers buyer protection, with a shield cover of up to $500. Ebay also offers their own protection, for buyers who are not using PayPal, with cover of up to $200. Ebay had previously built their own payment system called Billpoint. However, in 2002, Ebay acquired PayPal from inventors whom (included Elon Musk) for $1.5 billion.

In my opinion, it was the acquisition of PayPal that had set Ebay apart from it’s competitors. PayPal could offer its users a safer transaction, with built in fraud protection. After years of trialling payment systems, Ebay had finally found the perfect fit, although at a cost.

By 2007 PayPal had announced that they would partner with MasterCard to develop and launch the PayPal Secure Card service. An unrivalled service that meant customers could make use of PayPal on sites that did not accept PayPal Directly. Prior to this however, Ebay had stood alone in offering the most secure and efficient payment system in e-commerce. A triumph to better their customers experience. They would go on to profit themselves and their customers until present day.

A lot has been said about the success of Mark Zuckerberg’s Facebook. I have previously spoken about Zuckerberg as an entrepreneur in my article, Top 10 Startup Gurus.

Facebook, originally called the Facebook, was developed under creative, black hat methods in order to undermine its competition. Zuckerberg had taken the hacker mentality and applied it to his development in Facebook. He took the idea that all information is free and should be shared freely. By extension Zuckerberg believes that through this rapid sharing of information, we should all become better connected and better off socially as a result. Whether or not this type of thinking will work or indeed has worked is yet to be determined but it has been this application of thinking that has brought Facebook to the forefront of social technologies.

Over the years, Zuckerberg and his team have been able to maintain key philosophies that have been consistent throughout Facebook’s lifespan. One of those being its design element. Users have never been and never will be subject to online adverts in the traditional sense. Facebook profits from ads but the philosophy of a simple and clean design that does not distract the user from a clean and efficient usage has been maintained and protected throughout Facebook’s development.

Although at times surrounded by controversy concerning the protection and/or profiting off of user data. Facebook has been able to sustain its high usage via regular updates to its intelligent design and user interface.

Tinder may not have been the first dating application built for mobile but it is certainly the most well known. Tinder allows for communication between mutually interested users. By simply swiping right or left, an individual can indicate an interest for another.

Dating apps and websites have been around for as long as the internet has been. So why has Tinder has so much success?

Well I think it again comes down to the user experience. Tinder makes use of gamification by giving users a playful mechanic in the form of the swipe! On top of this, Tinders design allows users to feel rewarded for their use of the application. Getting matches can be considered as point based. The allocation of points that fulfil a reward based mechanic allow an individual to gain satisfaction and to track their status as a desired individual.

You can sign up for twitter via spotify and Facebook, this allows users to sign up very quickly, with very little effort and with most of their core profile data fully formed. This has meant that Tinder has become very popular among young individuals looking to form relationships.

This year (2017) Tinder has released a desktop version of the app.

I started this rant by talking about video game design so it seems right to end with it! The battle of the consoles or, entertainment systems if you prefer, is a topic that you may have read into. Even as non-gamer you will most certainly have heard of this intense rivalry. The competition between technology giants Microsoft and Sony has lead to some of the best innovations we have seen in user interface design over the past two decades!

This vying for position has reached a pinnacle with the introduction of the latest generation of this type of consumer electronic. The recent efforts of both companies to gain top spot has lead their latest devices to be practically identical in internal capability, with almost equal power and practically identical parts. With each device’s physical presence having nothing to set one apart from the other, it has come down to the software and ultimately the user interface of each console that is set to define their success in the consumer market. Since the consoles have had time to settle in the marketplace it’s become clear that there is only one winner of this excessive battling. Playstation.

I strongly believe that Playstation’s success in beating out Microsoft’s Xbox is to be awarded to its user interface that greets it’s players on start up. A simple design that allows user to manage their game library and watch TV in an uninhibited manner. A cleaner and ultimately more efficient design has won Playstation fans and newcomers alike.